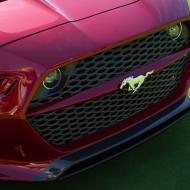 The new Galpin-Fisker Rocket Speedster’s bones have a resemblance to a 2015 Ford Mustang. A four-seater convertible has a specially-crafted carbon fiber rear tonneau cover to convert it into a lithe two-seat roadster.

Henrik Fisker is famous for designing the Aston Martin DB9, Vantage V8, and the BMW Z8. Fisker decided to move to the new 2015 Ford Mustang and gave it a wide-body stance with coach-built quality and appearance.

The Speedster looks suitably exotic with a tonneau cover over the rear seat. Fairing behind the front seats are flanked by mesh vents likely to allow air to pass through the space. This sounds great as does not let it become a huge pocket that increases drag.

There is more body color on the exterior, including the taillamp surrounds and the spear that spans the hexagonal perforated carbon-fiber grille.

When a Galpin spokesman was asked about the price of the car, he replied that the price shouldn’t vary much from that of the Rocket coupe. That car is available for $110K for models equipped with the base 425-hp Coyote V-8. The loaded, supercharged 725-hp version is available for sale for about $150K.

Henrik Fisker firmly believes that the Rocket is a rare beast, regardless of the roof design.