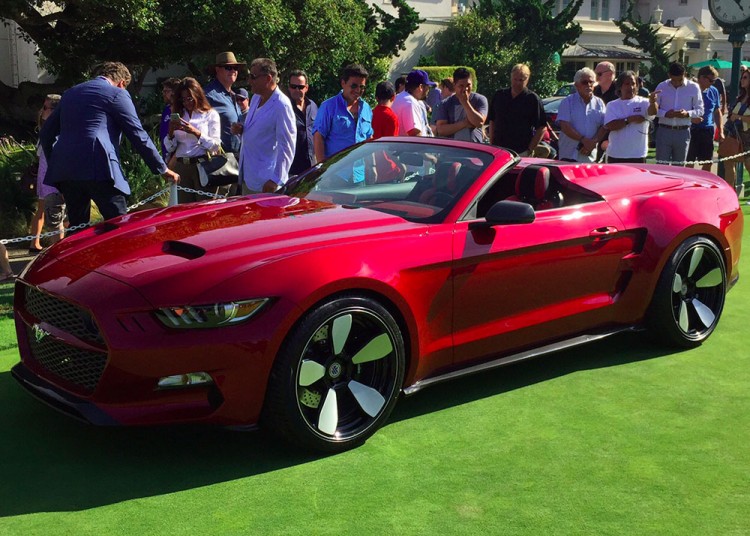 The carbon-fibre tonneau runs from the front seat headrests covering the rear seats. The bonnet is made from carbon-fibre, too, and features two scoops feeding air into the supercharged engine which makes 540kW, both the grille and front splitter are designed to aid engine cooling, while two additional air scoops, mounted on the rear fenders ahead of the wheels, help direct fresh air to cool 15-inch Brembo Gran Turismo high performance brakes. The car sits on special 21-inch metallic red color-keyed five-spoke alloy wheels.

“When I worked on the Rocket Speedster project with Beau, the creativity sparks were constantly in the air,” said Fisker.

“When I was designing the speedster cover, I gave it extreme sculpture and dynamic lines that flows with the muscular body of the Rocket and created a new interior graphic to go with it. I’m very excited to unveil the Rocket Speedster at the Pebble Beach concept lawn with Beau.”

“Henrik’s original design sketches for the Rocket gave me chills and the convertible is no different,” said Beau Boeckmann.

“This Speedster Concept has added another layer of style to the car without losing an ounce of the incredible beauty of the coupe. It really has been a dream collaboration, combining Henrik’s design execution with the performance and customization expertise of the Galpin Auto Sports team.”

There’s no word on pricing or final specification, but it’s likely it’ll follow the Rocket, but be priced at a premium given it’s a drop top.