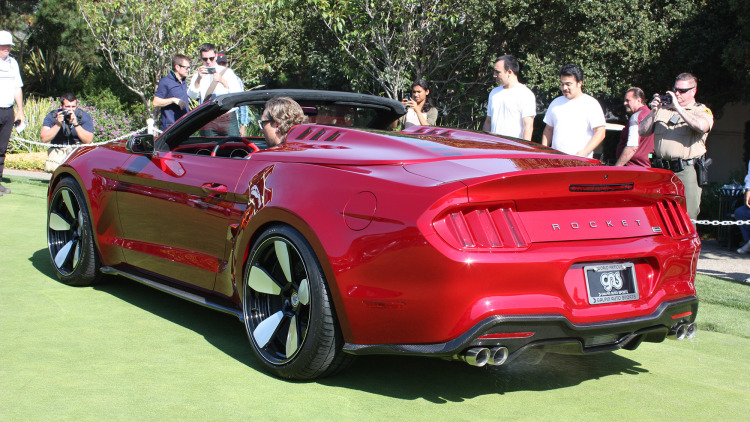 The Rocket Coupe, introduced at the Los Angeles Auto Show last year, was a collaboration in reimagination carried out by designer Henrik Fisker and Galpin Auto Sports on a Ford Mustang. The next version of that concept has come to Pebble Beach in the metallic red form of the Rocket Speedster Concept you see here.

In this guise the Mustang convertible gets a speedster tonneau cover that runs all the way to the front seat headrests, covering the back seats. As with the rest of the bodywork the cover is fashioned in carbon fiber, portions of it visible in places like the stripes running along the hood from the hexagonal grill to the tonneau, and the exposed carbon fiber air ducts that are mesh-filled to improve airflow through the cabin. And yes, it still has that nose.

Underhood is a supercharged 5.0-liter V8 with 725 horsepower, all that cavalry brought to a stop by 15-inch Brembo Gran Turismo brakes up front tucked behind 21-inch custom wheels. Although it is labeled a concept, it too will go into limited production like its hardtop forebear. The press release below has the info, the gallery above has the goods.