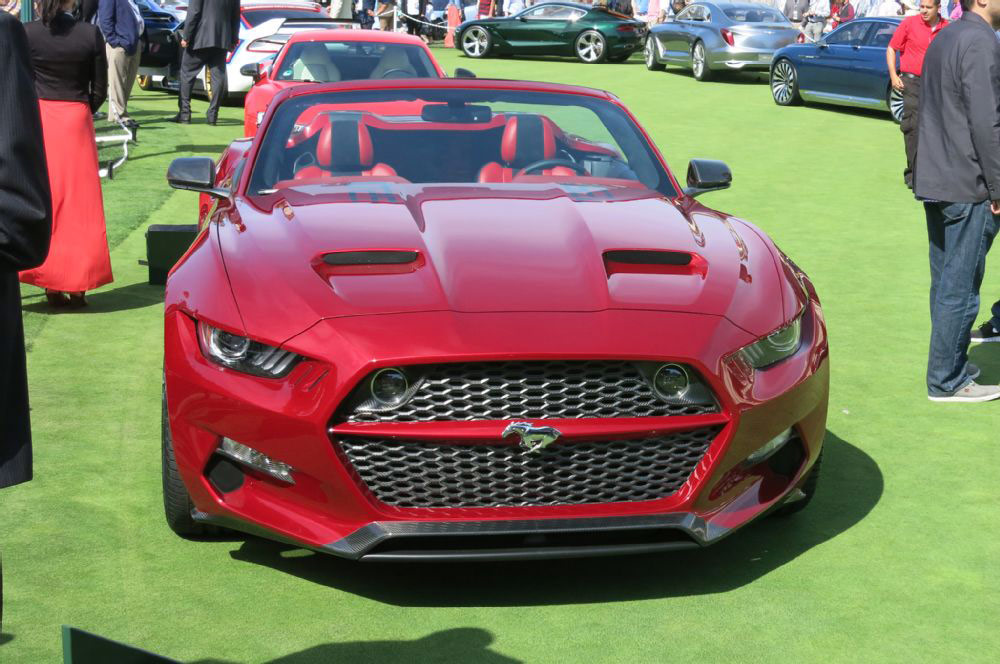 Like the coupe, the new Galpin-Fisker Rocket Speedster’s bones come from a 2015 Ford Mustang. Holding true to the Speedster designation, a specially-crafted carbon fiber rear tonneau cover converts the four-seater convertible into a lithe two-seat roadster. Henrik Fisker, renowned designer of the Aston Martin DB9, Vantage V8, and the BMW Z8, turned his pen to the new 2015 Ford Mustang, giving the muscle car a widebody stance with coachbuilt quality and appearance.

Just like its hardtop brother, the Speedster is motivated by a supercharged 5.0-liter V-8, pushing out a lofty 725 horsepower. However, it’s not like the 5.0-liter has much weight to haul around, though. Like the coupe, the Speedster features a body created from carbon fiber, including the hood, dropping the weight of the coupe. In the rear, ducts on the lower section of the rear fenders direct air to massive 15-inch Brembo Gran Turismo brakes, which hide behind the custom 21-inch wheels. Inside, a custom interior departs from the stock Ford Mustang design with new leather and color scheme.

While this particular Speedster is considered a concept, the Galpin-Fisker Rocket Speedster is fully production-intent, with orders already available at both Galpin Ford in Los Angeles or hand-picked dealerships around the world. The coupe’s price began at $109,100, so expect the Speedster to be a generous chunk of change.