Ford Launches ‘Rolling with Ford AND The BET Awards Contest’ 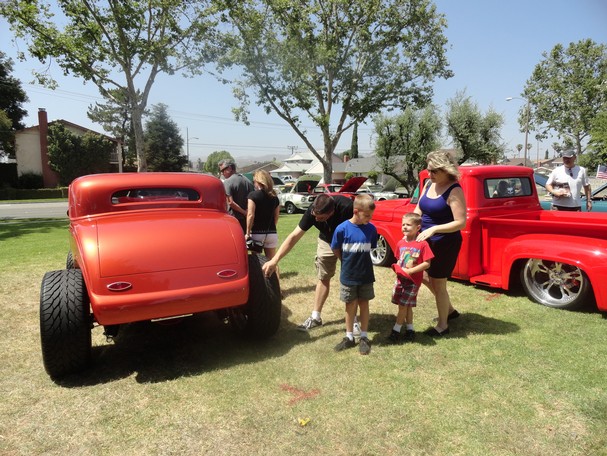 The Sycamore Drive Community Center had its grass crowded with coupes, roadsters and convertibles, plus a few new additions.

First time co-chairs for the event, Jim and Margaret Foster, decided to bring in the whole family for the show as the Fosters brought their 15-year-old son, Max, to the show to help out. Together they set up the raffle prizes, organized the addition of the food trucks to the event and passed out the awards.

Longtime Mustang fanatics, the Fosters became members of the Valley Mustang Club in February 2008 after their black 1968 coupe was in an accident.

“I contacted them in May 2007 to get information on who I could go see a to get my Mustang repaired,” Jim Foster said, a bond was struck and they became members soon after.

Foster said their 1968 Coupe was his first car, which he bought in 1976 “I’ve been a Mustang fan for quite awhile,” he said.

“Once we got the car repaired we joined a few of the Mustang clubs, (they are involved in a total of five different Mustang clubs throughout the area), and then I won a free entry into the Valley Mustang Clubs annual show for 2008,” Foster said.

The Fosters have been involved since. Jim was President of the Valley Mustang Club in 2010 and 2011 and Margaret was the secretary from 2010 to 2012, but this was their first year as chair of the show.

“The former chair, Ted Polisky, had been doing it for several years now and wanted to take a break so we took over,” Jim Foster said.

Ford enthusiasts from all over town came to the show; Dave Brosky of Simi Valley who been every year for the past seven years, said he comes out to get ideas on cars.

“I have a ’68 black Mustang that I would like to restore one day,” Brosky said.

Bruce, also from Simi Valley, bought his 1992 LX 5.0 hatchback and little by little brought it up to speed.

This show he had two little blondes helping to collect his award for him. “My daughters, 10-year-old, Jaelynn and 6-year-old, Jonelle, tagged along with me today,” Bruce said.

The Cartwrights from Simi Valley meandered throughout the Ford display and lingered by Robert Bennett’s mint green 1955 Thunderbird.

“We get too busy looking at cars to remember to even grab food,” Matt Cartwright said.

Matt and his father, Bill, have been going to car shows together for 15 years. “I have a 2007 Mustang GT, but I come to see the older models,” Matt said.

Matt said he has done some bodywork on his ’07 but his dad taught him the basics on a ’68 Volkswagen way back when.

“It really brings us together,” Matt Cartwright said.

It was another family affair for the Scolas who drove from West Hills to get a look at the Ford spread.

“The boys love the cars, we just end up following one car show after another,” said Nicolas’s mother, Stacie.

David Scola said he has a car at home for each of his boys, a ’77 Corvette for Nicolas and a ’69 Mustang for 5-year-old William.

Longtime sponsor of the Valley Ford and Mustang Club, Galpin Ford, previewed four of its newest models at the event.

“This is our third year here and we enjoy coming,” said Hannibal Agassi of Galpin Ford.

Agassi brought his wife and son, Brandon, who said he loves the Galpin widebody Mustang Boss. Crowds gathered around the four cars taking in every detail.

For someone’s first time at a car show, first place is not a bad starting point.

Joe Gately of Simi Valley brought his 40th anniversary of the 2008 Shelby GT500KR and did just that. “There were only 1,000 of these made,” he said proudly.

Gately won first place in Shelby All Years, although this was his first car show, he has been owning, restoring, building and racing Mustangs for over 40 years.

“I have owned over 35 Mustangs of various models, mostly high performance ones, I’ve slowed down over the past few years but when Shelby came out with the new KR anniversary edition I knew I had to have it,” Gately said.

Among the classic cars, barks and yaps could be heard from the Animal Rescue Volunteers booth.

“We have done events before for the Valley Mustang Club, but this is our first time here,” said Staci O’Connell, the volunteer in charge of the booth.

About two-dozen puppies and some full-grown mixes grabbed the attention of anyone passing by.

“Everybody likes to see dogs and this help to give us exposure,” O’Connell said.

Exposure was something the Andersons were well accustomed to: winners of Best of Show for their red 1964 Mustang Convertible. The couple has been Mustang owners since 1968.

“We live in Thousand Oaks and when we bought our house we joked we needed a nice garage with a house attached,” Whit Anderson said. They own a six-car garage that also houses a 1965 Coupe.

“It’s what we do,” Julie Anderson said of the car shows, “We drive together to them all.”

Julie said in their earlier days they would drive out to shows in Las Vegas, “But this is what we can do now.”

“Well, she doesn’t help me clean up the car afterwards, but she always packs great lunches,” Whit joked.