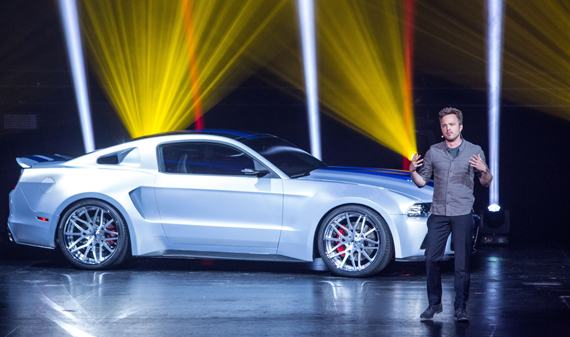 DEARBORN, Mich., June 10, 2013 – From appearances in James Bond’s “Goldfinger” to Steve McQueen’s “Bullitt” and now “Need for Speed,” the Ford Mustang has had one of the most prolific entertainment careers, with appearances in nearly 3,000 feature films and TV shows and a global fan following.

With a résumé like that, Mustang may someday get its own star on the Hollywood Walk of Fame.

Mustang has been so popular that one avid fan used crowd-sourcing to create a database on the Web dedicated to cataloging the pony car’s appearances.

“My Mustang interest started in 1966, when I was 14 years old,” said Stefan Thorarensen, founder and board member of The Icelandic Mustang Club. “My aunt bought a Poppy Red 1965 Mustang Fastback, and I have never gotten over it.” Thorarensen began collecting VHS tapes and DVDs as his passion for Mustang grew. In 2009, he used a list of 300 movie and television show titles as the starting point for creation of a comprehensive, crowd-sourced site called MustangImdb.com. About 100 contributors have grown the list of Mustang on-screen appearances to nearly 3,000 titles.

This crowd-sourced effort is just one demonstration of the power of Mustang, with such a broad worldwide fan base that it even includes clubs in such far-flung locales as Iceland, Poland and New Zealand, where it has never officially even been offered for sale.

Mustang got off to a quick start in the movies and has never looked back. Just eight months after its debut at the 1964 New York World Fair, a Wimbeldon White convertible was the mount of choice for a beautiful assassin hunting down James Bond in “Goldfinger.” Several years later, Bond himself took the wheel of the pony car as he raced through the streets of Las Vegas in “Diamonds are Forever.”

By 1968, Mustang was already an icon on the road, but the late Steve McQueen transformed the pony car into a movie star in its own right with what is widely acclaimed as the best car chase ever filmed, the nine-minute climax of “Bullitt.” Forty-four years later, that same sequence would be reprised on the small screen for the series finale of “Alcatraz.”

The 2000 remake of “Gone in Sixty Seconds” produced another iconic pony in the form of Eleanor, the silver and black 1967 Mustang driven by Nicolas Cage. That car was recently sold at auction for more than $1 million and has spawned numerous replicas.

As Mustang celebrates its 50th birthday next year, it will hit the silver screen once again in DreamWorks Studios, “Need for Speed.” The new film, inspired by the long-running series of driving video games from Electronic Arts, features the Mustang throughout the adaptation of the gaming franchise. The film’s star, Aaron Paul (“Breaking Bad”), will be joined by a one-of-a-kind, customized Mustang playing the role of the hero car.

“We’re thrilled to have Ford play such an important part in a film adapted from one of the most popular video games of all time,” said Keith Koeppen, Ford marketing communications manager. “Mustang has an incredible history appearing in movies and ‘Need for Speed’ will be a great way to continue its hero car legacy.”

Created with the help of designers at Ford, the one-off Mustang is perfectly cast for the high-stakes racing and stunts included in the film that fans will love. The Mustang features a more aggressive look due to custom bodywork including wider fenders and features like a lowered suspension and custom 22-inch wheels and tires. Even the fog lamps are new, with high-tech LED halo lamps around the air intakes.

A hero car needs a hero engine, so this Mustang has been fit with a 900-horsepower all-aluminum supercharged 5.8-liter V8 modified by Ford Racing. To top it all off, the car gets a custom paint job with specially formulated silver topped by blue stripes that glow when struck by light in the dark.

A preview of the movie can be viewed here. The film is scheduled for release in March 2014.

The Ford Mustang is about to become the newest member of a very exclusive club – vehicles in continuous production for 50 years. In its first 49 years of production, Mustang has gained a worldwide base of avid fans, including more than 5 million on Facebook, the most of any vehicle nameplate. Mustang’s unique combination of style, performance and affordability established an entirely new class of sporty cars, and it has led the segment ever since.

Over the past 49 years each of the more than 9.2 million Mustangs produced has been built in America, most of them close to Ford’s home base in Dearborn, Mich. From the racetrack to the silver screen to the airwaves, Mustang has become an enduring part of pop culture.