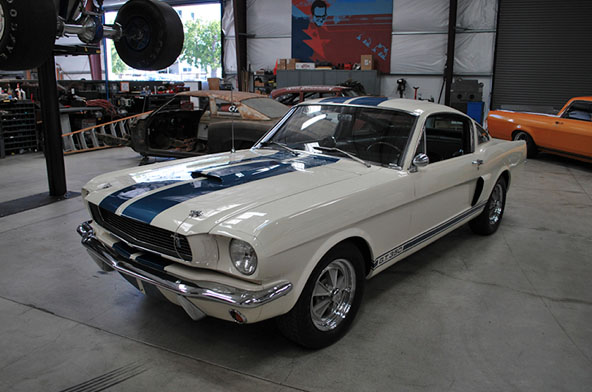 A parade of vintage glory: Mustang rally dazzles in the valley heat

The corners of Roscoe Blvd. and Orion Street were turned into a car lover’s paradise on Sunday.

In the northwest corner, Mustangs were gathered like the cool kids in high school and the low-riders situated behind them stood as their Danny Zuko-esque foil.

To their south were the custom rods, the wild children of cars. A truck resembling a World War II army transport truck stood next to what could only be described as a death mobile.

Inside the lone air-conditioned room, the Galpin Auto Sport showroom, the original Batmobile laid in wait, terrifying evil as it did in the 1966 show.

The free show, which drew thousands to the San Fernando Valley auto dealer, featured over 500 show cars from low riders, to rat rods and tricked out customs.

However, the star of the day was the Ford Mustang. Mustang of various model years lined the entrance to the show with multiple 1966 1/2 models making appearances, including one that was first sold at Galpin Ford in 1966.

For those who prefer cars of a more modern vintage, the 2015 Mustang made its public debut under the sweltering San Fernando Valley sun. The new Mustang features 435-horse power and will be the first Mustang to have a global design.

“They have taken the best of European design with American muscle and blended them,” said Jeff Skobin, marketing manager of Galpin Ford.

The prevalence of Mustangs at the show highlighted the enduring allure of the first great American muscle car.

“The big attraction was the body style in ’64 1/2, the sporty look and that the price was reasonable in 1964. That’s why they sold a million of those cars quickly,” said Craig Cunningham, president of the Mustang Owners Club of California.

This year’s show was held in honor of George Barris, the legendary custom carmaker to Hollywood.

Written by James Powel for TheCorsairOnline.com