What new car Jamie Kitman would purchase for under $100,000 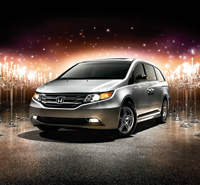 Odyssey becomes the only minivan to earn top safety ratings from both IIHS and NHTSA under more-stringent testing guidelines.

The 2011 Honda Odyssey minivan achieved a historic safety milestone, becoming the first and only minivan to earn the highest possible safety ratings from both the Insurance Institute for Highway Safety (IIHS) and the National Highway Traffic Safety Administration (NHTSA) under their respective more-stringent testing guidelines. No other minivan this year has received both a 2011 TOP SAFETY PICK award from IIHS and a "Overall Vehicle Score1" of five stars from NHTSA.

The Odyssey was recently named a 2011 TOP SAFETY PICK from IIHS, the institute’s highest honor. The award recognizes vehicles that do the best job of protecting vehicle occupants involved in front, side and rear crashes, plus rollover performance based on ratings in IIHS tests, as well as having a standard electronic stability control system. The Odyssey earned the highest-possible score of GOOD in all four ratings, including the more rigorous roof-strength test.