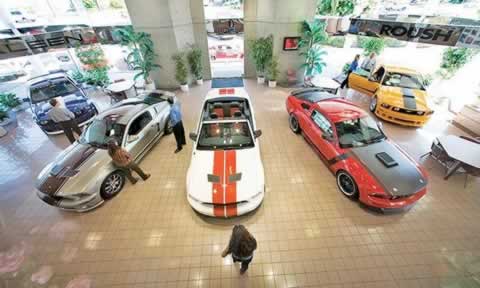 In early 1964, Galpin Motors was a small dealership with a two-car showroom in San Fernando, Calif., northwest of Los Angeles.

Then the Mustang thundered into the Ford lineup and nothing would be the same.

The booming Southern California of the mid 1960s — the state became the nation’s most populous during the decade — was the ideal frontier to embrace the Mustang and its wild, youthful and American image.

Galpin, sensing a hit, rolled out the tumbleweed, saddles and cowboy hats to help introduce the first pony car in a state that symbolized all that was sexy, fun and cool about America.

"The showroom was transformed into a mustang horse corral. We decorated the whole showroom, and I saw pictures of my dad dressed up as a cowboy. We had the whole western theme," Beau Boeckmann, CEO of customizing shop Galpin Auto Sports, recalled recently.

His family owns Galpin Motors Inc. in Los Angeles, one of the 25 biggest private dealership groups in the country and the top-selling U.S. Ford dealership, with retail sales of 8,101 new Fords last year.

"They thought something was special because they really went for it, but I don’t think anyone had the idea the Mustang would be as successful as it was," Boeckmann says. "There was an excitement about this car for sure."

Other Ford dealers also caught pony car fever. But almost from the start, the Mustang was the catalyst that transformed the Boeckmann family’s company in car-crazed Southern California.

The overnight popularity of the car helped Galpin come to dominate the race-car circuit and to become a retail sales powerhouse as the largest Mustang seller in the United States. Mustang fever also launched Galpin into its leading role as a customization specialist: The car accounted for 25 percent of Galpin’s annual customizing business.

Galpin sold 498 new and 163 used Mustangs last year. There have been years when Galpin has sold more than 1,000. "We’ve always had a focus on the Mustang because it really is a car that everybody can love and enjoy," Boeckmann says. "It is the top vehicle today that we customize in both performance and cosmetic, from hoods to wings to superchargers and suspensions. That is by far our No. 1 customized product at Galpin Auto Sports."

Hornaday was also a NASCAR driver for the Galpin team, which was the reigning West Coast NASCAR champion when the Mustang was introduced. He ran in the same circles as fellow race-car driver and famed performance car creator Carroll Shelby.

"Carroll Shelby himself actually delivered the first group of Shelby Mustangs to Galpin. We even have an original Galpin Ford 1965 Shelby GT350. We bought it in January 2011 through an auction, but it sat in a guy’s garage for 40 years," Boeckmann says. "It’s all original and never been restored."

Because of Galpin’s longtime race-car sponsorships and its strong relationships with drivers, the dealership was doing performance and cosmetic upgrades on Mustangs almost from the beginning, Boeckmann says.

"The guys who worked on the NASCAR cars were the same guys that worked on customer’s cars," Boeckmann says.

And because of its Hollywood location, Galpin sold the first special-edition Mustang Bullitt to actor Steve McQueen’s son, Chad McQueen, in 2005.

The car paid homage to the 1968 film starring Steve McQueen in which he maneuvered it around the streets of San Francisco at high speeds.

Galpin didn’t just start increasing its customization business during the early years of Mustang sales. It was also racing the cars.

In 1969, Galpin broke a 24-hour land-speed record in a Mustang. One of the drivers who set the record for the company was Boeckmann’s mother, Jane.

"My mom drove in it at Willow Springs, a local track about 100 miles from L.A. It was an endurance record for driving the car 24 hours straight, and it was a top average speed for that race," Boeckmann says.

The Galpin team’s average speed was 78 mph during a race dogged by bouts of rain and wind, he says.

"You had a driver and a navigator, and the navigator is a friend of my dad’s, and he said when my mom got in the car, she put her foot down and never took it off," Boeckmann recalls with pride.

The dealership has also helped influence Ford on Mustang design.

It was sitting on the showroom floor when Ford CEO Phil Caldwell came to visit.

"He asked if he could send it back to Detroit. So they did, and a few years later we had a Mustang convertible again."

Galpin has executed its share of notable customized Mustangs.

About six years ago, the TV show "Knight Rider" was revamped and needed a new car. The new story takes place 25 years after the original "Knight Rider" series and features the next-generation KITT (Knight Industries Three Thousand), now a Ford Shelby GT500KR Mustang, which Galpin created for the show.

Galpin has also serviced some famous Mustangs, including the four-engine Mach IV Mustang in 1969. The car was built by Gary Weckesser for drag racing and it could go above 170 mph, Boeckmann says.

"That was one of the most notable Mustangs we ever serviced, and we sponsored it with our name on the side," Boeckmann says.

Galpin is so proud of its Mustang heritage that about 10 years ago it converted what had been its Explorer showroom into a Mustang showroom.

The showroom holds five Mustangs that Galpin owns, including a Shelby model and a couple of "Galpinized" custom Mustangs, Boeckmann says.

The Mustang had one of the biggest impacts on Galpin’s business at the end of 2006, when the Shelby GT500 came to market, Boeckmann says.

"Here in Southern California, Ford was just getting hammered. Our market share was dropping like a rock year after year. The Japanese were eating our lunch," Boeckmann says.

"But that Shelby was a shot in the arm. Not only did it help us in every way possible — financially, emotionally, the morale of the sales department — but it was such a halo for the brand and for Ford Motor Co. It’s really one of the most important products for Ford imagewise and profitwise."

For Boeckmann, the Mustang has been a joy to sell because it is a car that doesn’t need to be sold.

"There’s a big difference," he says, "in gross profit in a car when someone wants it versus having to heavily incentivize it."