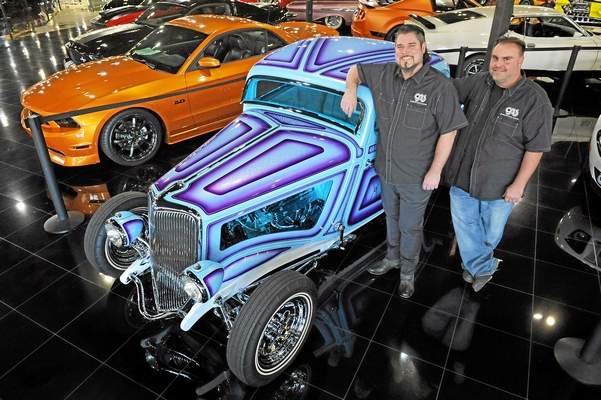 Galpin Auto Sports President, Beau Boeckmann and Lead Rod and Custom Builder, Dave Shuten (l-r), have been honored with induction into The National Rod & Custom Car Hall of Fame in Afton, OK. Boeckmann was recognized as a car collector and Shuten with the builder/owner award. Here they pose with the Iron Orchid hot rod in Van Nuys, CA.(Andy Holzman/Los Angeles Daily News)

By Gregory J. Wilcox in the Los Angeles Daily News

Boeckmann, president of Galpin’s customizing unit, was recognized as a top hot rod and custom car collector. Shuten, GAS’ lead rod and custom builder, received the hall’s builder/owner award. Both, who were inducted last month, were surprised by the honor. “I was blown away that they would honor me and it totally shocked me. I’m humbled by it,” said Boeckmann, son of long-time Galpin owner Bert Boeckmann.

Customizing came naturally to Beau Boeckmann. He pretty much grew up at the dealership on Roscoe Boulevard near the 405 freeway and the company has been customizing vehicles for 61 years, he said. “Probably my best memories of childhood were playing hide and seek in the conversion vans on our RV (recreational vehicle) lot,” he said.

Conversion vans — taking a stock showroom van and adding personal touches — were a popular trend in the 1970s and ‘80s. They made an impression on the youngster.

“I thought that was normal,” he said of the customized touches that Galpin’s crew added to the vehicles. “For me, a car was never finished if it was just stock. I was knee-deep in it before I knew it.”

One of Boeckmann’s more memorable jobs was 15 years ago when he customized a Lincoln Navigator that he used to haul around his wife and two kids. He outfitted the SUV with 22 inch wheels and customized the interior with an “amazing sound system,” PlayStation and black and gray leather and suede interior. It was a dealer vehicle, but Boeckmann thought it would be tough to sell. Six months after it was finished a sales manager said there was a buyer. “He said ‘Beau, someone wants to buy it and they don’t care what the price is. They just want to buy it’,” Boeckmann recalled with a chuckle. It sold for about $85,000. And the next time Boeckmann saw the car was at an event at Universal Studios. When it rolled up, Michael Jackson was riding in the back seat. “It became his daily driver. That was the car he used to sneak his kids out for pizza. I think the Jackson family still has it,” Boeckmann said. The first car he customized was a 1965 Mercedes 220E left to him by his grandmother. He still has it.

Shuten started working on hot rods and customizing cars when he was 15 years old. “I owned my first car for two weeks before I was pulling the motor out and putting in a bigger one. It’s an honor and a privilege to be able to restore cars. To bring a car back to life for people to see and enjoy is pretty cool.” Restoration projects can be a lengthy process and not all of the work is bending metal and turning wrenches. “It takes a lot of research. You have to dive in and find out what they were using back when,” Shuten said.

The hall noted that he has worked on a number of projects — both as a designer and builder of his own creations and restorer of the historic Galpin-owned customs. That secured his reputation as one of the leading experts of custom cars in the country and his work has been featured in Hot Rod, Rod and Custom, Street Rodder and Kustom Kulture magazines.

One of Boeckmann’s and Shuten’s latest efforts is the Galpin Iron Orchid, a 1934 purple, white and chrome Ford five-window coupe built in-house that has won a number of awards.

The Hall of Fame and a hot rod and custom car museum, noted attractions along fabled Route 66, is owned and operated by Darryl Starbird, who started designing vehicles in the 1950s and is known for his bubble-top cars. He has known about Boeckmann’s operation for years and the extensive collection of cars in a showroom at the complex that is used for various community events.

Boeckmann and Shuten have an eight-by-eight-foot wall space at the hall on which they can display photos and memorabilia of their careers.

The hall was started in the mid 1990s — Starbird was an inductee then — and honorees are selected by seven board members from around the country.

“We started with the most famous (designers) and of course Beau has been a collector for a lot of years and Dave, well he’s been getting a lot of notice for the last several years,” Starbird said.