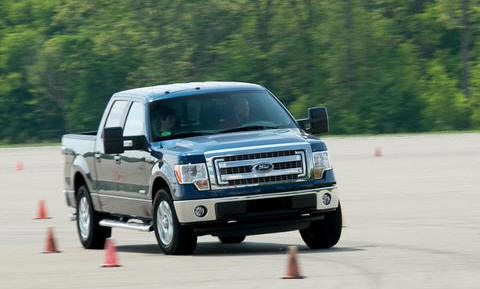 The full-size truck segment is fiercely competitive and filled with intensely loyal fans. You’re either a Ford (NYSE: F) guy, or a Chevy guy. I grew up in the Midwest, and you’d be surprised how often that’s the first question out of someone’s mouth. Not "What’s your name" or "What do you do," but "Are you a Ford or Chevy guy?" That’s how important it can be.

For those loyal Ford followers, you earned another bragging point today, because the 2013 Ford F-150 topped General Motors’ (NYSE: GM) redesigned 2014 Chevrolet Silverado in a head-to-head test. Here are the details, and what it means for consumers and investors alike.

The winner
Ford’s 2013 F-150 beat out five different competitors, including some 2014 models, in tests conducted by PickupTrucks.com and Popular Mechanics. It did so pretty thoroughly, too.

"In our performance-oriented competitive events, the Ford half-ton was dominating," says Mark Williams, editor of PickupTrucks.com. "It finished in either first or second place in 11 of 13 events. If this were the Olympics, there would be a new Ford F-150 on a cereal box."

All the competing trucks were put through grueling performance tests, including 0-to-60 mph acceleration, both loaded and unloaded, as well as braking, overall handling, towing, and fuel economy.

"The results of this test show why F-Series has been the best-selling pickup truck in America for more than 30 years," says Doug Scott, Ford truck group marketing manager. "We know our light-duty customers are looking for a pickup truck that delivers the leading combination of towing, payload, horsepower, torque, and fuel economy, and this shootout proves F-150 continues to lead the pack."

To put some visibility to his words, here’s how sales of the top four trucks in the competition look. 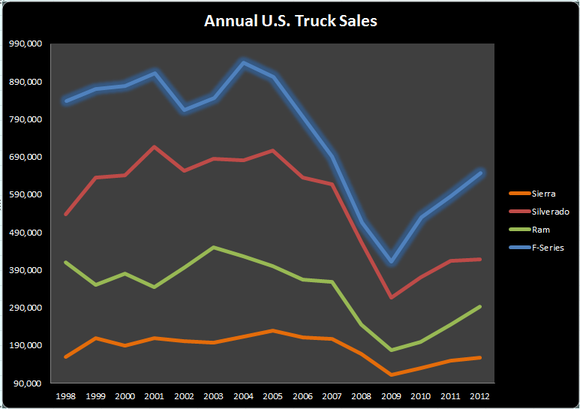 Now, as loyalist GM fans will point out, that isn’t a totally fair comparison, because its truck sales are split between two models, the Silverado and Sierra. Here’s how that graph looks when you combine those sales and then compare them with the F-Series. 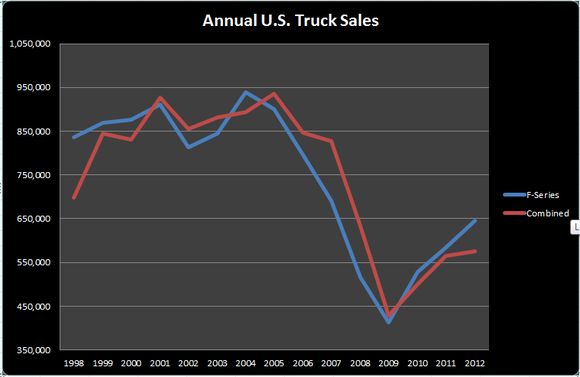 This is a good depiction of how fiercely competitive Ford and GM truck sales are. If you count them up, since 1998, Ford tops GM in seven of the years, and GM takes home the top spot for eight years. More importantly though, is the recent trend in which Ford has consistently sold more trucks since our nation exited the recession, no doubt in part because some consumers refuse to buy GM after it took a bailout, and also because the Silverado is years overdue for a redesign — which it finally gets in the 2014 model. For consumers, one thing is for sure: Though the F-Series seems to have a slight advantage, both trucks are impressive and lead the U.S. in sales for a reason.

Investing takeaway
Sales of these trucks are extremely important for two reasons. For one, it’s estimated that these trucks can represent as much as 60% of the bottom-line profits for Ford and GM. The F-Series and Silverado are the top two selling vehicles in the U.S., so both represent keys to gaining share in the mature market.

Second, right now is a prime time to take advantage of surging truck sales to boost profits quickly. These profits will be important to offset drastic losses in Europe, which could total about $2 billion per company. Right now is a pivotal time, because GM is hoping its newly redesigned 2014 Silverado will take back the sales lead and market share while the segment continues to increase in sales faster than the rest of the industry.

This isn’t a winner-take-all game, but if the new Silverado tops the F-Series in sales next year before the redesigned F-150 hits the market, it will have thrown a good punch at its crosstown rival’s profits. Ford hopes that studies like this from PickupTrucks.com and Popular Mechanics will persuade consumers to wait an additional year and skip over buying the 2014 Silverado in favor of its redesigned 2015 F-150. We’ll know by the end of the summer how things look to shape up in sales, but it will be a very intense competition for sales going forward.

This is something for loyal Ford and GM fans to watch for bragging rights, and for investors as they hope to see a surge in profits from Ford and GM’s most important vehicles.

Ford and GM rake in huge profits from truck sales, but are they best positioned for the biggest growth trend in the future? Well positioned automakers will return huge gains for investors. A recent Motley Fool report, "2 Automakers to Buy for a Surging Chinese Market", names two global giants poised to reap big gains that could drive big rewards for investors.