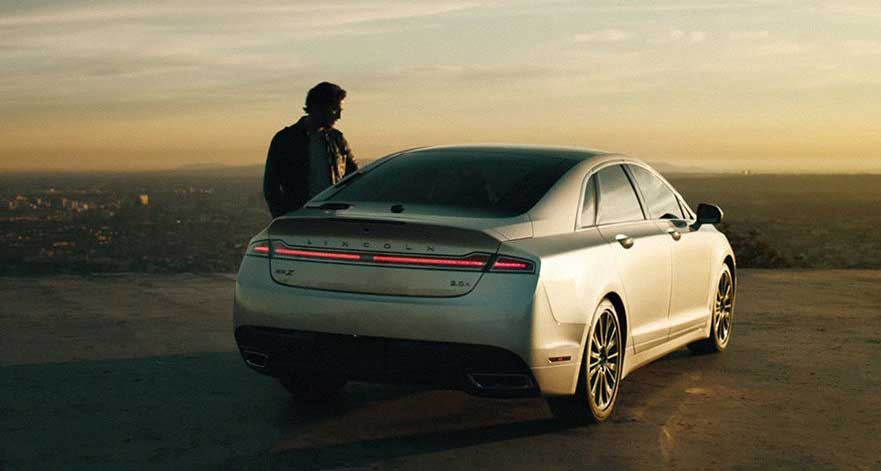 The Lincolnaissance: What Matthew McConaughey Taught A Car Brand About Forging A New Identity

For most of the last few decades, with its days as a leader in American luxury in the rear view, Lincoln was more recognizable as a ride to the airport than as a symbol of automotive aristocracy. Then last September, a pensive Matthew McConaughey, still basking in the Oscar-tinted golden glow of the McConaissance, appeared in an ad for the Lincoln MKC. The campaign thrust the carmaker into the white-hot social-media spotlight, and if it didn’t completely reinvent the brand, it recast it.

The sight and sound of McConaughey, who was on a career high after the Oscar win for Dallas Buyers Club and his acclaimed, meme-making turn in True Detective, musing to himself as he drove around aimlessly, rolling his fingers, were far from the hard sell of most feature-heavy boilerplate car ads. The ads, created with agency Hudson Rouge and directed by Nicolas Winding Refn (Drive), were unscripted, with the director providing loose storylines for McConaughey to riff off. The rest of the series followed the actor as he not only talked about his lifelong affection for the Lincoln, but also confronted the philosophical meaning of an 1,800-pound bull in the middle of the road.

The ads were a hit, blazing across the Internet and earning spoofs from Jim Carrey and Ellen DeGeneres. Suddenly, the brand was reaping the kind of cultural awareness that marketers contort themselves in all sorts of unbecoming ways to reach for but almost never grasp. The campaign, and its attendant SNL and Twitter buzz, helped Lincoln boost sales–which hit a 32-year sales low in 2013–by 16% in 2014. Lincoln’s global director Matt VanDyke says the McConaughey campaign drove traffic to dealers, tripled its website traffic, and helped the brand hit about 10% market share in the fourth quarter of 2014, which is about double its brand average.

Here, VanDyke talks about the lessons learned from this campaign, its outcome, the unexpected blessing of a well-timed spoof, and more.

A Change of Plans

When Lincoln’s marketing team first started talking about how to market the new MKC model, a celebrity spokesperson wasn’t even part of the discussion. It was a pivotal moment for the brand–the MKC was pegged as a cornerstone of Lincoln’s revival, and the car was earning positive reviews. The brand had worked with a celebrity before, in the 2010 campaign featuring a smooth-talking John Slattery. That campaign, while watchable, wasn’t enough to move the needle, and Slattery was an odd choice for a company looking to younger buyers. But former CMO Jim Farley had a chat with McConaughey’s representatives about what Ford was doing to reinvent the Lincoln brand. That changed the conversation among Lincoln’s inner circle.

"We had multiple teams weigh in from marketing, creative, PR, and dealer advisory board," says VanDyke. "Ultimately, we felt Matthew was at the right moment in his career, and matched our collective brand values and mindsets of being warm, inviting, and authentic. We weren’t looking for a celebrity face but a true collaborator, and we found that in Matthew."

“The biggest challenge was figuring out whether it was a good idea or not to have a celebrity partnership in the first place,” says VanDyke. “He identified with our brand reinvention journey, told us he’d driven Lincolns throughout his life, and while he hasn’t traditionally been a guy who worked with brands, he did say if we were ever interested to give him a call. That really made us think, because it wasn’t a strategy we planned to pursue. We didn’t have a list of celebrities, with Q scores and all that. We weren’t in the market to do that. But given the kind of conversation we had with Matthew, it really got us thinking.”

Internally, everyone at the brand got excited at the prospect pretty quickly. One thing they didn’t want, though, was for this to be the kind of celebrity endorsement where a famous name is parachuted in to create some immediate short-term buzz.

“We talked about, if we’re going to do this, it wasn’t going to be a one-year deal,” says VanDyke, on why the relationship kicked off with an initial two-year deal. “Matthew didn’t just want it to be a one-off campaign either, but rather, create a relationship here. We knew if we treated this like a conventional spokesperson role, it really will probably scream of borrowed interest and wouldn’t be very authentic to Matthew either. And because he’s attaching his name to us, he’s really been involved, coming up to Dearborn, Michigan, to spend time in our design studio, on the test track, and meeting with our senior leaders, because he really wanted to make that relationship real, and he was upfront about that from the beginning.”

Considering the Oscar winner’s presence, the ads, as directed by Refn, are very understated, which McConaughey has said is something that drew him to the campaign in the first place. VanDyke says it was a tough but conscious decision to avoid a loud, brash stereotypical car ad.

“We agreed early on that we’d look to stand out and draw attention to the brand by doing things differently, and that meant having this quieter approach,” says VanDyke. “Our logic and strategy was that the new products we have are really compelling, and we learned in 2013 that though we struggled to get noticed and attention to the brand, when we do get attention, people are surprised and a favorable opinion is there pretty quickly. So we took from that, that if a unique approach with Matthew can draw interest to the brand, it would be nothing but positive.”

We Can’t Emphasize It Enough: Taking Risks Pays Off

As much of a slam dunk as it looks now, the decision on whether to go with a celebrity spokesperson was seen as a significant, if calculated, risk. VanDyke is glad they took the plunge and in retrospect would do it again.

“For me, the biggest lesson is that it pays to take the calculated risk,” says VanDyke. “Like I said, we weren’t really considering a celebrity, but if the right authentic partnership comes by, it really can have the power to significantly amplify your marketing and advertising effectiveness. At another point in the brand revitalization we might not have been willing to take that risk, but what we realized is as a challenger brand, we have to be open to doing that, because the upside is greater than any potential downside.”

As soon as the campaign launched, VanDyke says Lincoln’s brand awareness and breakthrough metrics doubled, and traffic to the website tripled. But it wasn’t just car shoppers who noticed the new image. Soon the campaign hit earned media gold when spoofs of the spots on The Ellen Show and Saturday Night Live gave the campaign an unexpected boost.

“The parodies were just icing on the cake,” says VanDyke. “SNL takes shots at everyone with a sense of fun, and believe it or not, on the Monday after it aired, I was getting calls from dealers telling me they had people coming in and asking to see the vehicle that was in the McConaughey commercials that were spoofed on SNL. These people were telling our dealers that they’d never seen the car or considered Lincoln until seeing the spoofs, and many actually bought the car based on those visits. So the spoofs actually sold cars, too.”