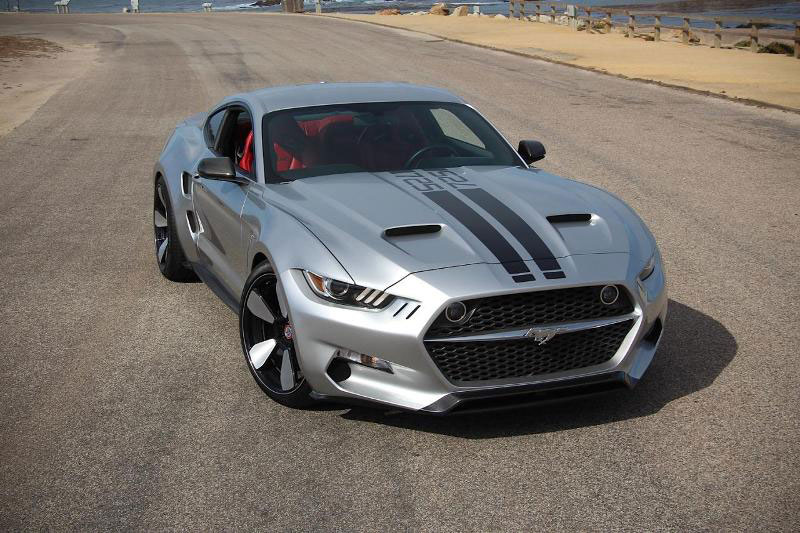 Certainly, “Rocket” is a suitable name for a $109,100 muscle car, but the fact of the matter is that the other named parties have made great contributions, including its builders and tuners, Galpin Auto Sports of Van Nuys, Calif., and of course, Ford itself. We took a brief spin along 17-Mile Drive during Monterey Car Week to see if it’s worth the coin.

“Ford’s engineers and Moray Callum’s design team did an amazing job with the new Mustang,” said Fisker. “So good, in fact, I think the design additions and power upgrades we have made to the car help it play in a higher league, against much more expensive supercars.”

This explains why, unlike the Mercedes-Benz SL-based Tramonto and BMW 6-Series-based Latigo models that Fisker offered late last decade, the Rocket’s modifications do not attempt to disguise the car on which it’s based. For inspiration, he recalled Shelby modified Mustangs in the 1960s—the 1968 GT500 in particular. “They actually made a lot of changes to the body; a different front and a different rear. We went one step further and we made the whole body new, but we still made it look like a Mustang. You can see the themes of the Mustang, but I widened it and made it more aggressive, so the whole car is more muscular.”

The Rocket’s muscular stance is matched by some nifty details. The stock front lighting units were rearranged to mimic the ’68 Shelby GT500. The hexagonal grille is no cheap plastic mesh but rather a perforated panel of matte carbon fiber bisected by a milled aluminum spear — not shiny plastic, but real aluminum — onto which the iconic galloping Mustang ornament is set. There are, of course, several other openings in the car’s bodywork meant to facilitate cooling of the engine bay and/or brakes, too, which, like the rearranged lights, evoke the aforementioned GT500. A tall, ducktail spoiler mitigates any need for a tacked-on trunk spoiler and at various places — including the taillamp surrounds, hood stripes, and the entire lower edge, the body’s carbon fiber panels are left naked. Did we mention all of the Rocket’s bespoke body panels are carbon fiber?

Inside, the cabin typically will remain mostly stock, but our test car’s was fitted with the $21,000 (!) Full Rocket Interior, which fits impossibly soft Tuscan leather to nearly everything you can touch — hand-stitched to ensure a proper fit over the console’s edges and the contoured racing seats — and a suede headliner. (Galpin will do just the seats for $4,500.) Carbon fiber makes another appearance on the Mustang’s dashboard, which is already dripping in metallic and/or chrome switches and knobs in stock form and hence, already has the glitz factor associated with this price point.

While the Rocket come standard with the GT’s 430-hp Coyote V-8, six-speed manual, and 3.73:1 rear differential, the real boost comes from a $15,900 supercharged performance package, which adds a 2.9-liter Whipple supercharger to crank output to a monstrous 725 horsepower at 7,000 rpm and 572 lb.-ft. of torque at 5250 rpm. Thus equipped, the Rocket delivers brutally quick acceleration, though we must issue the caveat that our drive was limited to touristy sections of 17 Mile Drive, hardly the right venue to test explore any car’s performance potential, least of all one with 725 horsepower.

At the (mostly) temperate speeds we sustained, then, the Rocket proved remarkably easy to drive. It is certainly fast (in short spurts) and, perhaps best of all, one satisfyingly loooouuuud machine; its standard Bassani exhaust bellowing inebriating notes at any and all rpms, and the supercharger adding a playful, if muted, whine upon acceleration. Meanwhile, running up the six-speed shifter’s ratios felt familiar because it remains the same delightful yet benign manual gearbox used by the Mustang GT — ditto the clutch — further enhancing the Rocket’s everyday usability.

Balancing out the car’s formidable power is some stupendous stopping power. The GT already uses six-piston front Brembo brake calipers, but our test car came with the optional brake upgrade that swaps both ends to Brembos and adds oversized (15-inch) rotors, and suffice it to say, the car can stop. Like, now.

All the while, the Rocket’s ride is firm and impact absorption is crisp, communicating plenty of road texture. The kit car body shake often associated with aftermarket cars is notably absent — a happy result of having left the main structure of the standard Mustang intact — and there’s no tooth-rattling brittleness: “We’ve worked on the suspension probably harder than anything,” said Steve McCord, General Manager of Galpin Auto Sports and the engineering leader for the Rocket. After fitting racing coil-overs to all four corners to keep it flat in corners, McCord’s team tuned the dampers for a softer ride. So effectively, it’s got a race suspension with a comfortable ride, yielding predictable weight transfer when rolling through corners and steering that is comfortably numb on-center but that livens up as cornering forces build. We kept the rear end planted during our stint behind the wheel, ever mindful that the Rocket’s precious carbon fiber rear end is two inches wider than the stock GT’s, but the car clearly had a lot of grip — and power — left to explore.

“We didn’t want to do some sort of show car,” said Fisker. “We wanted to make this a car people could drive every day…we made the front spoiler high enough, and we made sure we cleared all the hard points [of the structure] and safety features.”

The Rocket — or Galpin Fisker Ford Mustang Rocket, formally — is available for order now in coupe and a new speedster form. And with no more than six to be built per month, it will be a very rare creature. Want one? Contact Steve McCord at Galpin Auto Sports (rocket@galpin.com).