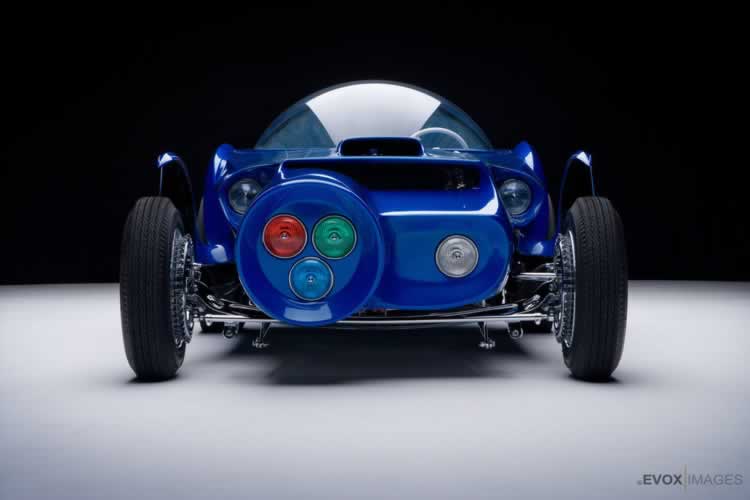 Object Lesson: The "Big Daddy" Roth car that was lost, then found

Every car has a story. But few are as good as the one surrounding "The Orbitron," the space-age ride created in 1964 by California’s most renowned custom car builder, Ed "Big Daddy" Roth.

The car had an electric-blue asymmetrical body that sported a bubble-shaped roof. The interiors consisted of sky-blue shag (known colloquially as "monkey fur"). Just under the dash, it featured a full-blown color television — presumably so that the driver could stay up on all the tele-novelas while sitting in rush-hour traffic.

The Orbitron is now on view at Kayne Griffin Corcoran as part of an exhibition devoted to exploring work by L.A. artists of the 1960s. This was a group of artists that often employed a preponderance of industrial materials: resins, plastics, car paint and the like.

In addition to pieces by esteemed figures such as Larry Bell (known for his mirror and glass cubes) and Peter Alexander (who created transparent wedges of plastic that recede into trippy nothingness), the show also features other period objects, including a 1962 surfboard produced by board-making pioneer Hobie Alter .

And then, of course, there is the Orbitron. The car currently resides in the collection of Galpin Auto Sports, a car accessories and customization company in Van Nuys. Among other objects, Galpin Auto has an extensive collection of Roth cars and memorabilia. Robert Dean, who curated the show at Kayne Griffin Corcoran, said he found the Orbitron via a recommendation from the artist Robert Williams.

"I was turned on to the Galpin collection by Robert Williams, who early in his career had worked for Roth," he told me via email. "I picked it out from the others in the collection because it seemed to touch on all the qualities — fetish, finish, polish, shaping, pin-striping, surface, plastic bubble, etc. — of the artists in the show."