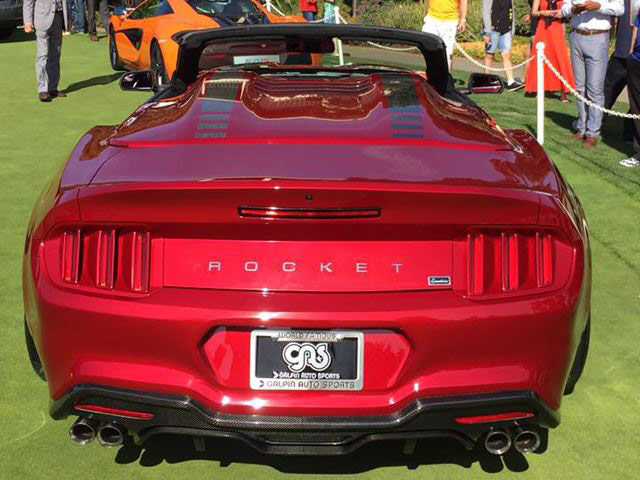 At last year’s Los Angeles Auto Show, Henrik Fisker blew us away with his insane Mustang-based concept which he called the Rocket, built along with the folks from Galpin Auto Sports. Now, the Galpin-Fisker partnership has returned to unveil a two seat convertible version of the car, this time dubbed the Rocket Speedster. The exotic rendition was shown on the Pebble Beach Concours d’Elegance Concept Lawn, and promises to be as exciting as its coupe brother, which has been produced in just two examples (with 13 more on order).

The Speedster features a carbon-fiber cover that replaces the Mustang’s top. With two seats left, the design adds sportier aerodynamic features. The cover integrates mesh that runs behind the cabin, channeling airflow over the rear deck. The Mustang GT’s 5.0-liter V8 remains, but is supercharged to produce 725 hp. Differentiating it from the Mustangs you know, the car gains 21-inch wheels, more exterior color and that visible carbon-fiber grille. Inside are a body-color dashboard and leather seatbacks. Pricing for the Speedster hasn’t been released, but the Rocket coupe ranges from $110K for 425 hp models to $150K for the 725 hp version.