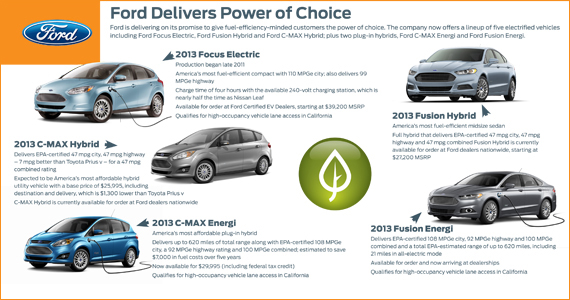 DEARBORN, Mich., Feb. 20, 2013 – Californians now have another Ford vehicle option to get them where they’re going even faster with the all-new Ford Fusion Energi plug-in hybrid, as the vehicle has been approved for use in the state’s high-occupancy vehicle (HOV) lanes.

To earn access to these faster moving carpool lanes, vehicles must qualify for tax rebates through California’s Clean Vehicle Rebate Project, which is overseen by the California Air Resources Board (CARB). A vehicle that qualifies earns a special sticker that identifies it as having HOV privileges.

Ford Fusion Energi buyers are eligible to receive a $1,500 tax rebate – in addition to a $3,750 federal tax credit – making Fusion the third Ford brand vehicle to now qualify for California’s special financial and driving incentives, and putting Ford in the lead, along with Toyota, for having the most vehicles of any automaker allowed access to the state’s carpool lanes. Ford Focus Electric and C-MAX Energi plug-in hybrid also qualify.

“That Ford has the most 2013 vehicles eligible for HOV lane access in the largest electrified vehicle market in the U.S. underscores our success in truly offering power of choice, especially when it comes to electric and hybrid powertrains,” said C.J. O’Donnell, group marketing manager for Ford Electrification.

To qualify for the programs, a vehicle must be classified by CARB as a super ultra-low emission vehicle and be certified by the U.S. EPA to offer fuel economy of at least 45 mpg on the highway.

Fusion Energi not only meets CARB standards but also has an EPA-estimated fuel economy rating of 100 MPGe combined– 108 MPGe city and 92 MPGe highway – along with a total range of up to 620 miles on one tank of gas and one full charge; Fusion has an electric-only range of up to 21 miles.

This means at least one leg of the average work commute – reportedly 20 miles each way – could be completed each day with Fusion Energi never using a drop of gas. A study by the United States Department of the Treasury estimates congestion consumed an extra 1.9 billion gallons of fuel in 2011, approximately 5 percent of all gasoline used.

In California, Fusion Energi is the ninth Ford vehicle to qualify for carpool lane access through CARB since 1993, with Focus Electric and C-MAX Energi plug-in hybrid being the most recent.

“Fusion Energi is Ford’s most fuel-efficient sedan and offers a top electric-only speed of up to 85 mph,” said O’Donnell. “Californians clearly appreciate the environmental benefit, too, which is why we are seeing the state’s programs embrace Ford’s electrified lineup.”

Programs like California’s Clean Vehicle Rebate Project are growing in number to encourage the use of vehicles that produce fewer emissions and use less gas. They range from the $3,750 federal tax credit owners may receive for buying Fusion Energi to a program in Ferndale, Mich., where drivers of hybrids that get 30 mpg or better in the city are allowed to park for free at city parking meters. Other states offering lane driving privileges for hybrid vehicle owners include Florida, Georgia, New Jersey, New York, Tennessee, Utah, Virginia and West Virginia.

Delivering choice Ford’s launch of the new C-MAX Hybrid, C-MAX Energi plug-in hybrid and Fusion Hybrid this past autumn led the company to deliver record-setting hybrid sales in December, resulting in a 9 percent market share gain to 16 percent. In the same period, Toyota’s share of the hybrid vehicle segment fell 8 points, from 68 percent to 60 percent.