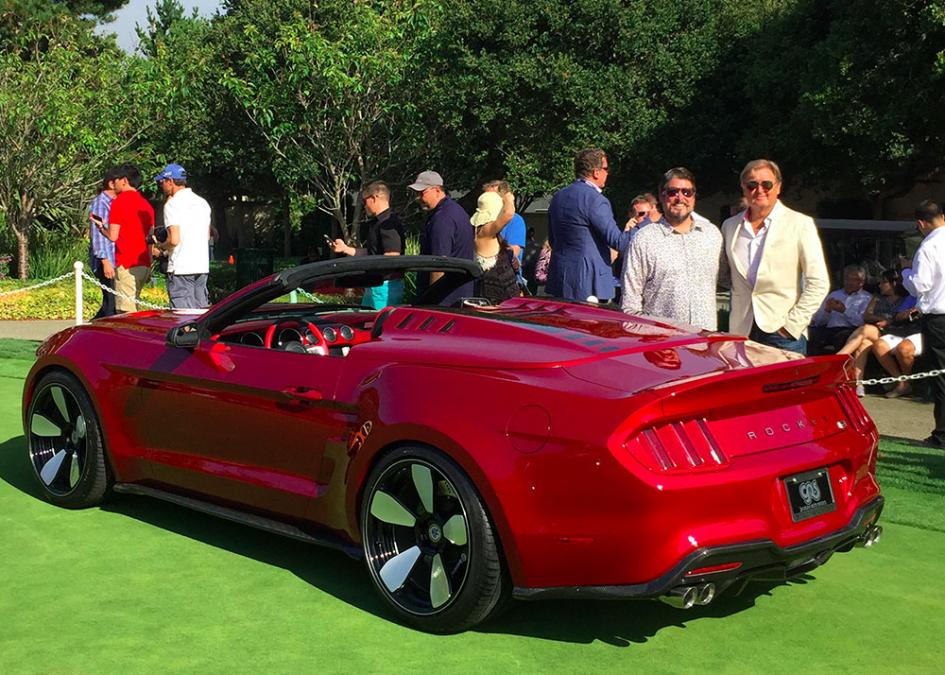 Henrik Fisker and Galpin Auto Sports have revealed their latest project at the Pebble Beach Concours d’Elegance in California.

Called the Rocket Speedster Concept, the car is a carbonfibre-bodied, roofless roadster based on the current generation Ford Mustang, and a development of the original Galpin and Fisker Rocket unveiled at the Los Angeles auto show in late 2014.

Henrik Fisker’s name will be forever attached to the struggling electric vehicle maker he started in 2007, but look beyond this and you’ll soon unearth his talent as a designer of cars like the Aston Martin DB9 and BMW Z8.

Together, they’ve endowed the already-beefy Mustang convertible with a wide-arched body kit, distinctive wheels and the same deep front grille of the Rocket coupe, but the Rocket Speedster’s most obvious alteration can be found above the window line.

Where once you’d have found four seats there are now only two, with a sculpted, carbonfibre rear deck that sweeps from humps behind the driver and passenger seats to join with the boot lid.

These humps are echoed by sculpted elements in the bonnet, where large nostrils draw air to feed the 725bhp supercharged V8. There are further scoops ahead of both the front and rear wheels to send cooling air to the 15in brakes.

A coat of deep metallic red paintwork swathes the Rocket’s curves, with the car’s carbonfibre construction visible in polished sections that extend from the grille to the speedster cover.

Beau Boeckmann, President of Galpin Motors, said Fisker’s design gave him ‘chills’, adding that the Speedster Concept ‘has added another layer of style to the car without losing an ounce of the incredible beauty of the coupe.’

While the Speedster is described as a concept, Galpin says the car will actually be available to order as a low-volume production car.