In the Garage with Dennis

CRIMEFIGHTER FORD F-150 IS A TRIBUTE TO THE ORIGINAL BATMOBILE 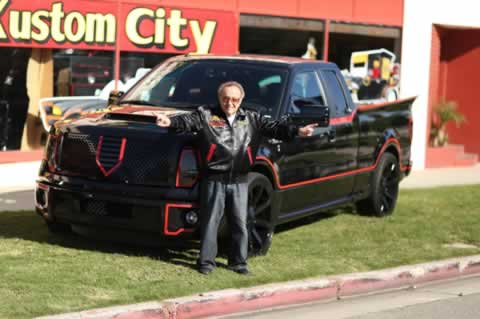 George Barris, the creator of the original Batmobile, with the Crimefighter F-150 his grandon built in tribute.

In true Justice League fashion, not to be outdone by the Superman Power Wagon we saw last week, Batman now has a truck of his own as well. Back in 1965, George Barris built the iconic first Batmobile using parts he found at a hardware store and the body of a Ford Futura concept car. The car, has made Barris a legend among custom car designers and in January auctioned for a cool $4.2 million. According to the Orange County Register, in light of the auction Barris’s grandson Jared wanted to create a tribute to his grandfather’s Batmobile. What he designed is a Batmobile, or rather a Bat Truck, for the 21st century. Dubbed “The Crimefighter,” the truck is a 2012 Ford F-150 customized by Galpin Auto Sports with a tuxedo black paint job and Ferrari red accents that create a look much like that of the original Batmobile. The bed of the Crimefighter has even been adorned with fins. The cool thing about the Crimefighter is that Galpin Auto Sports is taking orders on the custom truck.You can visit their site, or call 1-800-GO-GAS-GO for pricing.