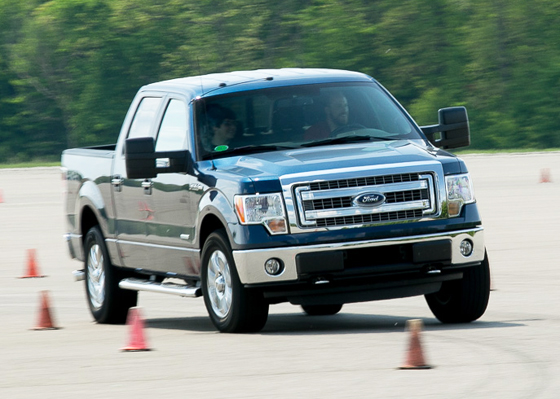 OK, we’ve been through the testing, we’ve put on the miles, and now we’re just about ready to render our verdict.

We decided to judge these trucks both on their physical capabilities as well as other more subjective characteristics. Thankfully, we were able to get experts from RaceLogic and Popular Mechanics to help out. The end result is mountains of data and impressions collected, and one overall winner for our 2013 Light-Duty Challenge.

Scoring a test like this can be complicated. In the past, we used a series of formulas that weighted each category according to how important (or not) we thought those categories were. Not so this time. This year each winner of each quantitative test was awarded 100 points and all other competitors received whatever fraction of points their own score deserved when compared to the winning time or distance.

For example, if the winning truck accelerated a prescribed distance in 10 seconds and the second-place finisher accelerated in 11 seconds, the former would be awarded 100 points and the latter 91 (10 divided by 11= 90.9). Likewise, in stopping distances, if the winner stopped in 135 feet (100 points) and the fourth-place finisher stopped in 153 feet, the fourth-place truck got 88 points. (You can do the math.)

The only place where fractions were allowed into total scoring was in the qualitative section, where judges could award points in any way they saw fit. As you can see from our judges’ impressions, each expert had his own biases and preferences, and each reflected those opinions in his scores. The fact that this particular section can be considered "fuzzy" motivated us to designate this section to be worth about half as much as the 13 objective categories.

Before we get to the final finishing order, we’d like to thank our third-party experts at RaceLogic (thanks Joe Lachovsky) who were responsible for collecting our test data and providing tons of helpful testing advice, as well as both original equipment manufacturer support teams that helped us use the Chrysler and GM Milford Proving Grounds to their fullest (Ford, it’s your turn next time). And thanks also to our compatriots at Popular Mechanics: Your insights and driving skills were hugely appreciated. We’ve been told readers can look for PM’s own half-ton challenge in the September issue, going on sale near the beginning of August.

For all our quantitative test and calculated data in one head-to-head chart, click here.

Say what you will about the F-150, but as the biggest-selling half-ton in the U.S. offering the most engine choices and trim packages in the class, you had to think this was the favorite from Day One. Although the F-150 hasn’t won a PUTC comparison test since the 2010 V-6 Work Truck Shootout, we should note we’re not counting last year’s Ultimate 4×4 Shootout because the Ford Raptor is in a class by itself. The performance in this well-equipped XLT SuperCrew with its Max Tow Package was, quite simply, dominating. In the quantitative section of our test, with 13 different performance tests and max rating calculations, the Ford outdistanced the competition by a significant margin. It won five competitive events outright and came in second in six others. However, in the qualitative section of our testing, the Ford’s domination fell short. In fact, even though the F-150 did not garner any harsh criticisms, the XLT interior was clearly not up to the levels seen in the new GM trucks and Ram 1500. After the judges’ scores were sorted, the Ford never received higher than a third-place finish in this section, winding up in fourth place overall in our qualitative portion of the test. But this contest wasn’t only about what a few experts think, so now that all the dust has settled on one of our most thorough and exhaustive half-ton pickup truck comparison tests, the 2013 Ford F-150 is PickupTrucks.com’s 2013 Light-Duty Challenge Champion by 11.5 points more than the Ram and 15.75 points more than the GMC. Congrats to Ford and to all of our competitors, because this was one crazy, brutal battle royale.