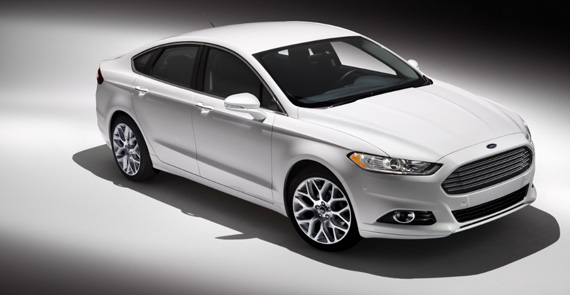 To earn the “+” distinction, Top Safety Pick Plus winners must earn good ratings for occupant protection in at least 4 of 5 IIHS evaluations, with no less than acceptable in any test. IIHS rates vehicles good, acceptable, marginal or poor based on performance in a moderate overlap frontal crash, small overlap frontal crash, side impact and rollover, plus evaluations of seat/head restraints for protection against neck injuries in rear impacts.

“Ford is thrilled to earn this new, highest safety distinction from IIHS,” said Steve Kenner, global director of the Automotive Safety Office. “The Fusion is a leading example of exemplary vehicles being designed and produced by Ford to the highest standards of safety.”

Protection in case of crash

The all-new Fusion features the Personal Safety System with new safety belt technologies and redesigned front and side airbags.

The Personal Safety System is a network of components that work together to tailor the deployment of the front airbags during frontal collisions. The restraint control module (RCM) translates information collected by the front crash sensors, front outboard safety belt buckle switches, driver-seat track position and passenger seat weight sensor. Using this information, the RCM activates the safety belt pretensioners and determines how the dual-stage front airbags will deploy. This tailored deployment is designed to help better protect an occupant by adapting its release to the size and position of the front seat occupants.

The redesigned seat-mounted side airbags deploy lower in the pelvis area and incorporate new venting technology. The tunnel vent on the seat mounted side airbag is lined up with the shoulder area of the occupant. On larger passengers, the shoulder engages the vent and keeps it from venting so the gas stays inside the airbag. On smaller passengers, the effect is just the opposite: Because the occupant’s shoulder is below the vent, the gas vents out of the airbag.

The driver’s airbag uses a reconfigured curve-shaped tether system that pulls in the lower section to create a pocket that is designed to help lessen the impact of the airbag on the driver’s chest and ribs in frontal crashes. Deploying at the same time is a driver’s knee airbag.

Fusion brings the broadest selection of fuel-efficient powertrains in the midsize car segment. Consumers have the choice of a pair of EcoBoostfour-cylinder engines, a normally aspirated four-cylinder engine, an automatic start stop system to shut off the engine at stationary idle, front-wheel drive and all-wheel drive applications, and a choice between automatic and manually shifted six-speed transmissions. The Fusion also offers hybrid and plug-in hybrid alternatives, which offer 47 mpg on the highway and in the city (hybrid) and 100 mpgE, a mile per gallon equivalency metric for electrified vehicles.

Maneuvering parking lots and traveling open roadways become even safer and less stressful with Fusion’s available sensor-based BLIS® (Blind Spot Information System) with cross-traffic alert. BLIS sounds an alert when a vehicle is detected entering a blind spot. Cross-traffic alert warns if traffic is detected approaching from the sides, such as when Fusion is leaving a parking space in reverse.

Parallel parking the Fusion is also virtually stress-free with the available active park assist. With the press of a button, the system detects an available parallel parking space and automatically steers the vehicle into the space. Drivers remain in control of gear selection, acceleration and braking.

Other driver assist technologies that are offered on the Fusion include: