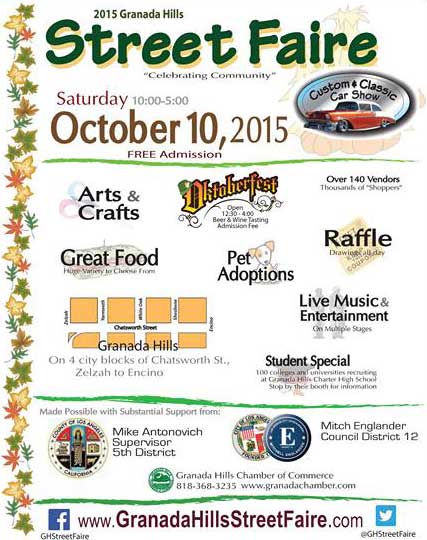 GRANADA HILLS, CA — The Granada Hills Street Faire will be ‘Back by Popular Demand’ on Saturday, October 10th 2015. This year’s theme is ‘Celebrating Community’ and admission is free. The Faire will run from 10am to 5pm along Chatsworth Street between Zelzah and Encino Avenues. Four city blocks of Chatsworth Street in downtown Granada Hills will be transformed into a traditional street faire with fun for the entire family. You’ll find numerous booths featuring arts and crafts, products and services from local vendors, children’s activities, pet adoptions, fantastic food, entertainment from multiple stages, a live radio broadcast, and a huge classic car show. Also included will be a raffle featuring interesting and unique items. Get your raffle tickets early, as prize drawings begin at 11am and will run all day. New this year is ‘Octoberfest’, beer and wine tasting for only $20 per ticket (get yours before they sell out).

The Faire first appeared in 2001 and grew to one of the Valley’s largest single-day events, attracting over 20,000 attendees from all over Los Angeles County. The Faire is back again this year, bigger and better than ever. This year’s event is made possible, in part, by support from the offices of Los Angeles County Supervisor Mike Antonovich, and City Councilman Mitch Englander, as well as community sponsors. The event is under the auspices of the Granada Hills Community Foundation and managed by the Granada Hills Chamber of Commerce.