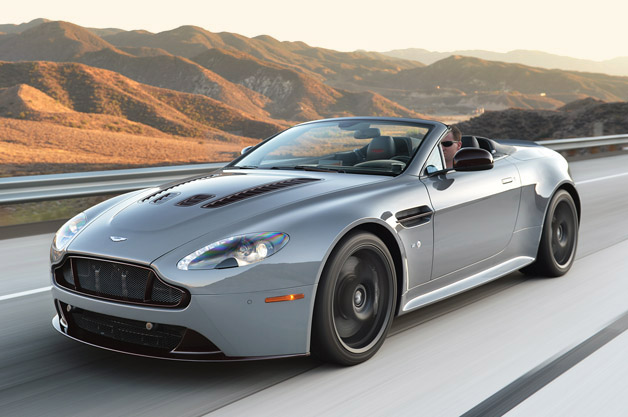 Aston Martin previewed its most powerful, quickest-accelerating and fastest production roadster ever at this year’s Pebble Beach Concours. The 2015 V12 Vantage S Roadster is essentially a convertible version of the V12 Vantage S Coupe, which we reviewed last year, a model that drops the automaker’s most potent powertrain into its smallest chassis.

Unlike the outgoing V12 Vantage Roadster, this new S model boasts a more powerful engine, a new transmission, new adaptive suspension and more luxurious appointments along with freshened styling. While last year’s beloved six-speed manual gearbox is gone – a thought that continues to bring tears to our eyes – everything else about the updated roadster piques our interest. We recently spent a full day in the mountains and deserts surrounding Palm Springs with a China Grey (with red carbon fiber accents) version of the British automaker’s latest.

The 2015 V12 Vantage S Roadster is an old-school European muscle car that reeks of tradition, a reality credited to the company’s near-century of history, frustrating age-old English ergonomics and the fact that the Vantage has been in production since 2005. Yet there are very few late-model cars that are as satisfying visually and emotionally to drive. In 30 years, when our grandchildren ask us to reminisce about our favorites from this era, rarities like the V12 Vantage S Roadster will come to mind.

Written by Michael Harley for AutoBlog.com